How To Set Goals Using The SMART Formula 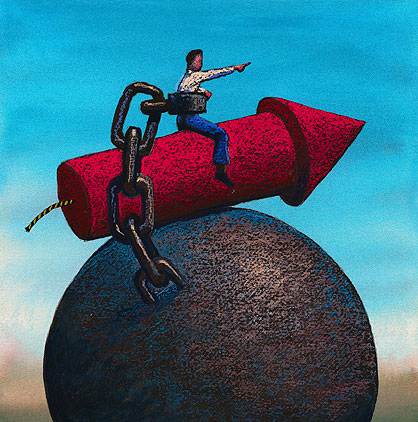 Have you ever heard of the SMART formula?

When time begins to rush at you quickly, do you know where you are headed? The goals you set for tomorrow are your pictures of success. By setting them today, you aim your activities in the right direction. But a goal should not be just, “I want to lose weight,” or “I hope to be rich someday.” Those goals are too vague. They’re like New Year’s resolutions—well-intentioned wishes that are short on substance. So use a handy acronym known as the SMART formula to clarify your goals. There are different variations on this formula. I have looked at them all and made a subtle change to the acronym that I think works better. The acronym of the SMART formula stands for Specific, Measurable, Appropriate, Realistic and Timely.

Goals such as being happy, getting rich or having a good time lack specificity. But when they focus on more concrete aims such as getting married, reducing accounts receivable or taking regular vacations, they take on more definition. Being specific also means being focused. Many people find themselves frustrated because “there are just too many things to do and not enough time.” They can’t get more time, but they can specify fewer goals.

The s in “specificity” also stands for “substantial.” It means a goal is concrete and worthy of pursuit. You might decide that cleaning up your desk is a goal. But it’s not the sort of lifetime accomplishment you would want to be praised for in your epitaph. If cleanliness is an issue, then certainly establish a goal to improve. But put it in context with more important pursuits. What will you be proud of five years from now? If you had to write a resume right now, what would you want to put in it? Your accomplishments would be based on goals that are specific and substantial.

The second criterion a goal should meet is measurability. State your goal in a way that an outside observer could measure it objectively. For instance, “We will reduce delinquent accounts by one third,” or “I will take two vacations this year,” or “I will stop smoking in two months.”

Something that is important can be measured with more than one goal. For instance, a sales rep might aim for specific sales dollars, profit for the territory, introductions of new products and an increase in distribution channels. It’s possible that she would be successful in one criterion, but not in another. Multiple goals provide greater perspective.

An appropriate goal is within your area of power or responsibility. Don’t try to work on someone else’s goals. Appropriate goals are also consistent with your organization’s aims, culture or standards. For instance, it’s difficult to have a goal of increasing customer satisfaction levels while simultaneously introducing discount pricing.

Appropriate goals also relate to your personal style. What are you capable of accomplishing, given your background, your skills, your training or your physical limitations? People who are only five feet tall have little chance of making the Olympic basketball team.

That’s not to say you shouldn’t extend yourself. It is possible to go beyond anything you’ve done before, and to push yourself past the limits you thought were unsurpassable. It ispossible to stretch your imagination to conquer heights you thought were unreachable. Allow your dreams to flourish. But make sure you have the appropriate resources, time and makeup to turn your dreams into reality.

Goals should also be appropriate to each other. For some businesses, a goal to increase sales by 20% by the end of the quarter may be inappropriate with simultaneously reducing bad debt accounts. In many cases, one or the other can happen, but not both.

Goals should be a bit of a stretch, but not so much as to be out of reach. A goal might be achievable within the next three months, but this deadline may be unrealistic, given the other constraints you’re facing. In your business, don’t aim for a market share that is simply not going to happen. Often new businesses will make claims that seem to be very modest; a very conservative 1% share would satisfy them. In reality, that’s a huge amount!

How do you know what is realistic? Look for relevant comparisons. Examine historical trends. What has been done in the past? Or look at economic indicators. What are the trends for the future? Or industry trends. What has the competition been able to achieve? Has someone else embarked on a similar journey whose results might indicate what is possible?

A dose of good old gut feeling also helps. Tripling your salary in your current job by the end of this year is a specific and measurable goal. But it’s not very realistic if you’re earning minimum wage by washing dishes at the local greasy spoon. In that case, perhaps your goal should be to find a higher-paying job or to start your own business.

Put a deadline on your goals—this Saturday, the end of the month, the end of the year, your fiftieth birthday, whatever. Start with the end in mind. What will the final picture of success look like and when do you want it to happen? By determining the end time, you can then work your way back to see what you need to do on the way. The challenge you might face is that your goal seems overwhelming. You just don’t know where to begin. If that’s the case, break your larger goal into smaller ones.

One extra letter for the SMART formula…

Perhaps the SMART formula should have one extra letter, and that is “p” for “passion.” Pursue your goals with passion! Don’t become complacent about not meeting them. For example, saying, “We didn’t meet our goal last month, but that’s all right, we’ll make up for it,” should never be good enough. Rework your goals if necessary, but pursue them with a renewed vigour and with a sincere desire to succeed.  Always give it your best, and then some. InWho’s Running Your Career, Caela Farren says, “Passion and purpose go hand in hand. Passion is the fire in the belly, the willpower, the courage you harness to achieve your mission despite all the obstacles and reversals.” Go for it!

Your time is worth it.