Up The Creek Without A Poodle 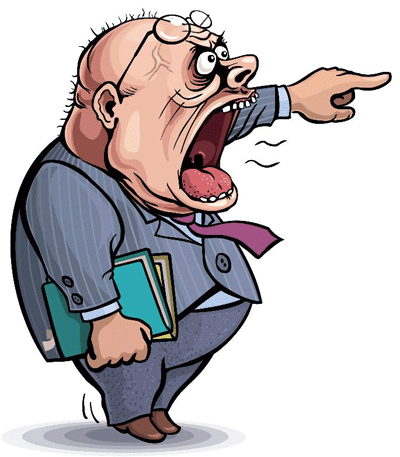 There was something odd about my day at work today. I can’t quite put my finger on it, but in a strange way I felt as though I were tangled in a web, caught in a trap of overwhelming clichés from which there was no escape. Let me explain.

It all started when I arrived right on the nose at 9:00 a.m. and began some heavy number crunching. Once I got my nose into things, it dawned on me like a ton of bricks that the business was taking a real nosedive. Not only that, but my nose was itchy. We were sitting on the edge of disaster in a sink-or-swim situation, and that was just the first of many aqueous metaphors yet to come. I asked my assistant if he had a minute to discuss the matter, and he popped in for a second. Somewhere, fifty-nine seconds had been lost.

When I informed him that the business was going downhill, he offered to take a stab at the situation. This seemed perfectly appropriate, as he was brandishing an Exacto knife at the time. Conceding that I was in the dark about what to do, I asked him to shed some light on the matter. So he turned the lamp switch on. Brilliant idea.

I then shot off to a meeting, where the financial director got on my back about reduced profits. This was a crushing blow, and it didn’t do much for my posture either. Back on my own turf in my office, I tried to touch base with the production manager. Getting in touch with her was difficult, and we ended up playing telephone tag. Unfortunately, no touchbacks were allowed.

After an eternity, we were finally able to get our heads together. This was a somewhat difficult maneuver, considering we were on the phone at the time. She wanted to chew the fat, so I suggested she try the Swiss steak, today’s cafeteria special. She decided to sit on the problem until it blew over, but I insisted we tackle it head on from all sides. We were getting squeezed on our costs, but our bottom-line commitments had already been locked in. To make matters worse, someone had lost the key.

I passed the buck to my assistant, since I owed him for coffee anyway. The project was now on his plate and I gave him the green light to fork out some dollars to get a handle on the situation and get the ball rolling. He seemed to be on the ball, a practice he had learned from his days as a circus performer. He promised not to drop the ball.

We threw some ideas back and forth and one of them knocked over a plant in the corner. After a while our impromptu blue sky session generated a whole flock of pie-in-the-sky alternatives. However, I suggested that a down-to-earth solution would be more appropriate, and just what the doctor ordered. Actually he only came in on alternate Tuesdays, but I’m certain he would have ordered it anyway.

We considered jacking up the price, blowing through a promotion offer, pumping out some inventory and firing up the sales force. Any of these would cost a bundle, but we couldn’t afford to pull the plug on our sales, or the water cooler, for that matter. I was beating my head against the wall. A few minutes later someone from maintenance came by to patch up the considerable hole I had created.

Up to my ears in work, it was time to take a breather. So I headed down to the break room, but it had burnt when someone’s idea had fallen out of the frying pan and into the fire. Then, on the way to the coffee shop, I ran into the research analyst. I fell over, and hit the ground running.
As we were recovering from the collision, I made her aware of my predicament. Unfortunately, she couldn’t help; her hands were tied because she had been tied up in a meeting.

Upon returning to my desk, my boss paid me a call. It was a good thing he did because he owed me for coffee too. He had a beef with me and flew off the handle with some off-the-cuff remarks about a write-off, claiming I had been goofing off. Before he could lay off, I laid it on the line for him. Our new initiatives had slipped through the cracks and the competition was beating us to the punch. We would have to get ourselves out of the tangle and fix the problem, or we’d be in a real fix down the road. I got out a screwdriver, just in case.

It was time to bounce a couple of my ideas off my boss. He picked one up off the floor and tossed it back into my court, saying that he would be sold on the concept if it had more meat on it. There was a skeleton of an idea but it needed fleshing out, unlike my boss, who was twenty pounds overweight.

Later, my assistant and I thought we had the problem licked. But my boss jumped out of the boat, leaving us high and dry, up the creek without a paddle. It looked like our idea had been blown out of the water. We needed something to bail us out. So I grabbed a used coffee cup and began scooping up the ever increasing flood of metaphors that had filled my office.

Coffee cup in hand, I realized we had to do something to keep the ball rolling. So my assistant suggested another circus trick. It was time to put another idea on the table, but my boss said the proposal just wouldn’t cut it. No wonder. The table was made of metal. If we were going to rally back with a counterattack, we would have to gather our forces and strike while the iron was hot. It had been set at delicate linens.

Finally an idea hit me. Ouch. The solution had been staring me in the face all the time. So I stared back. This was tough, though, because I couldn’t see the forest for the trees. All the time we had been barking up the wrong tree and going out on a limb for the low hanging fruit when the solution was a grassroots idea that was within our grasp. Sort of like cheap bananas.

It seemed the new concept would hold water, so I decided to test the waters to see if the idea would float with my manager. I brought along a life jacket, just in case.

Out in the hallway we flagged down the president. We ran our idea up the flagpole with him, but he raised a red flag. This wasn’t the time for flag waving, though, and for a moment it looked like we would fall out of bed, flag held patriotically in hand.

Nonetheless, we had already geared up for his comments and managed to pull it all together. The president said he would buy into the plan, but was a bit short of cash. So someone lent him a dollar. When the production manager caught wind of the proposal, he too jumped on the bandwagon. In fact, this was the most exercise he had had since jumping to a conclusion earlier in the week.

So we found the solution. We pulled an all-nighter to fix the problem – keeping in mind the 80-20 rule, we gave it 110% for 24 -7 and at the end of the day, when the dust settled, I was ready to pack it in and wrap it up. I just hoped the courier would deliver it on time.

Mark Ellwood is president of Pace Productivity, an international consulting firm that specializes in improving corporate productivity. His passionate mission is to improve people and processes through consulting and training.
← « Previous Next » →